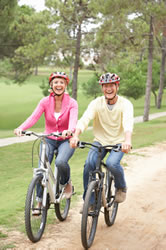 The emphasis of exercise on prevention of cardiovascular diseases, metabolic diseases such as diabetes, osteoporosis to name a few has been strongly instilled in society. However, many are unaware of the great benefits of physical activity on the brains wellbeing. With an aging population, Alzheimer’s and Parkinson’s are becoming more prevalent, which is why we must address the importance of daily physical activity.

In the aging population the cortex (responsible for thoughts and actions), and the hippocampus (responsible for storage of long term memories, and memory of location of objects or people) of the brain have been reported to decline with age. It has been seen that exercise can delay this process of degeneration. A study has reported individuals that were physically fit had performed better in measures such as reasoning, working memory, vocabulary and reaction time, in comparison to the older population that were inactive1. Another studied assessed the effects of exercise in inactive individuals that began a regular exercise, over months to years. Cognition was evaluated before and after, where it was concluded overall physical activity improves cognitive function1. MRI studies have also revealed that prefrontal and temporal grey matter in the brain was higher in quantity than sedentary individuals2

The effects of diet on the brain has been relatively well explored and known to many. There is increasing evidence of certain foods combined with exercise that will optimise memory function and neurotransmission3. Epicatechin found in dark chocolate and green tea being one of the flavanols with this benefit.

Some of its benefits of epicatechin include:

Omega-3 fatty acid consumption combined with exercise has been found to enhance the effects on spacial learning and neurotransmission. Research has revealed that mechanisms that mediate the effects of nutrition on the brain include neurotransmitters (chemical messengers from a nerve cell), neurotrophins (proteins important in survival, development and function of neurons) and vasculature. It is also thought that the effects of diet and exercise on the brain could be activating a common cellular pathway.

It is important we are leading a healthy lifestyle, which means regular exercise and a well-balanced diet. Being an aging population we must decrease the rate of conditions such as Alzheimer’s and Parkinson’s where we can.

If you or someone you know are currently suffering from Dementia, these lifestyle changes can be very beneficial to the individual. Here at Lakeside Chiropractic, our chiropractors may assist those with dementia or other neurodegenerative diseases, by assisting in motor control and normal muscles functioning. We offer soft tissue therapy, adjustments and mobilisations to joints, dry needling, interferential, trigger point therapy, rehabilitative exercises and stretches.

Lakeside Chiropractic is central to the northern suburbs of Perth located in the city of Joondalup. If you are in the surrounding suburbs such as Currambine, Kinross, Mindarie, Iluka, Banksia Grove, Tapping, Hillary’s, Burns Beach, Ocean Reef, please come and see our friendly and experienced chiropractors. With HICAPs on site we can process your Health Fund payment immediately, no need for you to go to them. We can process HBF, Medibank, BUPA, SGIO, HIF, GMF Health and CUA. If your fund is not listed please feel free to ask at the time of your booking. You can contact us on 9300 0095, or visit our website www.lakesidechiro.com.au to make an enquiry or booking.